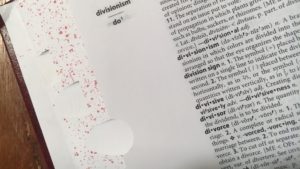 I’ve been working with a group of Collaborative divorce professionals from different disciplines to put together an educational seminar about Divorce Options . Because we are attorneys, mediators, mental health professionals and financial professionals who all practice in the divorce arena, we all know a lot about divorce. However, some jargon is still unfamiliar to each of us. We agree that divorce jargon must be really confusing to those who’ve never been involved in a divorce before.

I am not an attorney and I do not give legal advice, however, here are some definitions for legal terms that divorce professionals use, assuming everyone understands what they mean.

ALIMONY: An obsolete word used informally inside & outside of the divorce community. Current terms – Maintenance or Spousal Support. Money paid by one spouse to the other to provide support after a divorce or legal separation

ALLOCATION OF PARENTAL RESPONSIBILITIES: This term replaces the word Custody. It is broken into two categories. The standard for deciding what the arrangements will be is the “best interest of the child.”

ALTERNATIVE DISPUTE RESOLUTION (ADR): Methods for resolving disputes without fighting in court. Although you can use ADR for deciding the terms of your divorce, a court filing is required to get a decree of dissolution.

ANNULMENT: A process to dissolve a marriage in a legal proceeding where the marriage is declared void, as though it never took place. The legal term is “Declaration of Invalidity of Marriage.”

CHILD AND FAMILY INVESTIGATOR (CFI): A court-appointed expert who investigates and writes a report for the Court as to the children’s best interests in a controversial divorce or custody case.

CIVIL UNION: A legally recognized union of a same gender couple, with rights and obligations like marriage.

CO-PETITIONER: A person who jointly completes, signs, and files a written Petition, or a written application to the Court with the Petitioner, asking for specific action.

COHABITATION: A living arrangement in which an unwed couple live together in an intimate relationship that resembles a marriage

COMMON LAW MARRIAGE: A marriage that takes legal effect, without license or ceremony. When a couple lives together as husband and wife, intend to be married and hold themselves out to others as a married couple they are married under common law. There is no such thing as common law divorce. You must still file in court to get a divorce, as with any other marriage.

COMMUNITY PROPERTY: A method of dividing Marital Property based on an equal or 50/50 division between spouses,. Courts will generally only divide property acquired by one or both spouses during the marriage. The following states use the community property method of property division: Arizona, California, Idaho, Louisiana, Nevada, New Mexico, Texas, Washington, and Wisconsin. Alaska has adopted a community property system, but couples must opt in for these laws to apply.

CUSTODY: An obsolete word used informally inside & outside of the divorce community. In family law cases, it is also known as Allocation of Parental Responsibilities, and refers to Decision Making and Parenting Time.

DECISION MAKING: In Colorado the rights to make decisions regarding education, religion, and medical care are allocated to one or both parents.

DECREE: Also called Permanent Orders. An enforceable order based on legal authority. The divorce decree includes the date of final dissolution of the marriage and the court ruling on each related matter, such as property division, child support, parental responsibilities & spousal maintenance.

DISSOLUTION: The legal end of a marriage.

EQUITABLE DISTRIBUTION: A method of dividing property between spouses, which is based on an equitable or fair division (not necessarily an equal or 50/50 division). Most states, including Colorado, use this method.

FAMILY COURT FACILITATOR: A Court employee who assists with divorce & custody cases and conducts Initial Status Conferences.  The Family Court Facilitator can help you understand what you need to do during your case, answer questions, and give you instructions about the next steps in your case. The Family Court Facilitator cannot give legal advice.

GARNISHMENT: A court-ordered procedure for taking money or property from someone to pay a debt. For example, a person’s wages can be garnished to pay child support, back taxes, or a lawsuit judgment.

INITIAL STATUS CONFERENCE: A meeting with the Family Court Facilitator who will help you understand what you need to do during your case, answer your questions and give you instructions about the next steps in your case. You will not be given any legal advice.

INTERLOCUTORY: (Temporary Orders) Refers to an order, judgment or appeal, that is temporary and issued or taken while the case is still pending and is not final.

JUDGMENT: A court’s final determination of the rights and obligations of the parties in a case.  The term includes a Decree and any order that can be appealed.

JURISDICTION: The authority of the court to hear a case.

LEGAL SEPARATION: A court order granting the right to live apart, with the rights and obligations of divorced persons, but without divorce.  The order can include issues relating to child custody, alimony, child support, division of property and debts.

MAGISTRATE: A person other than a judge authorized by Colorado law or by Colorado court rules to make orders or judgments in court proceedings, like trials or hearings.

MARITAL PROPERTY: Property subject to division by the court in a divorce proceeding, includes most property acquired during the marriage.

MEDIATION: A process where a trained, neutral person helps people involved in a court case reach their own solution.

MOTION: A request,usually made in writing, to the court.

NAME RESTORATION: The process where a married woman restores her name to her former name when the divorce decree is issued.

NO–FAULT DIVORCE: A divorce that doesn’t require one spouse to prove the other spouse’s fault or misconduct before being entitled to a divorce. Only one spouse must declare the marriage is broken. Colorado is a no-fault divorce state.

NON–APPEARANCE HEARING: This is not an actual hearing, and no one needs to show up in court.  This is a date that the court puts on their calendar as a reminder to take further action.

NON–MARITAL PROPERTY: Property that belongs to only one spouse and won’t be included in any division of property – also called Separate Property

NOTICE: The formal legal process of informing one spouse about a legal action or proceeding involving that spouse.

PETITION: A legal paper that starts a case.

PETITIONER: The spouse who filed the divorce petition – also called the Plaintiff.

PLAINTIFF: The person who started the case – also called the Petitioner.

PRENUPTIAL AGREEMENT: A contract signed by two people before their marriage, setting out each spouse’s rights to property & assets in case of a future divorce.

PRO SE (pronounced pro say): Latin phrase that means “for himself.” Representing yourself in court without an attorney.

QUALIFIED DOMESTIC RELATIONS ORDER (QDRO): A court order giving one spouse a share of the other spouse’s pension or retirement funds.

QUIT CLAIM DEED: A real property deed which transfers the grantor’s interest in a property. The responsibility for the related debt or mortgage is not transferred by Quit Claim.

RESIDENCY REQUIREMENT: The length of time a spouse must live within a state or county before that spouse may file a divorce action in that state or county. In Colorado, the residency requirement is 90 days.

RESPONDENT: A person who has been named in a court case and was served legal documents that were started and given to the Court by another person, known as the Petitioner.  If the Respondent wishes to have a say in the case, he or she must file or give a response to the Court.

SEPARATE PROPERTY: Property or assets that belong to only one spouse, which were acquired before marriage, or through a gift or inheritance. Separate Property usually won’t be included in the property division.

SEPARATION AGREEMENT: A written agreement concerning custody, child support, spousal maintenance, and property division made by a married couple who are usually about to get a divorce or legal separation.

SERVE: To give court paperwork that starts a court case or is part of a court case to the other person in the case.  This is done by someone who isn’t involved in the case,  a sheriff, or private process server.  The person starting the case cannot deliver the paperwork.

SERVICE OF PROCESS (or SERVICE): The official act by which a person is notified that a court action has been filed against them.  They are personally given a copy of the document(s) filed and information as to the steps they should take in order to respond to the court action.

SETTLEMENT: The resolution or compromise by the parties in a civil lawsuit.

SETTLEMENT CONFERENCE: An informal assessment and negotiation session conducted by a legal professional who hears both sides of the case, may advise the parties on the law and precedent relating to the dispute, and suggest a settlement.

SPOUSAL SUPPORT: Also called Maintenance or Alimony. Money paid by one spouse to the other to provide support after a divorce or legal separation

STIPULATION: An agreement by opposing lawyers on any matter. Most stipulations must  be in writing.

SUBPOENA: A form issued by the court requiring someone to appear in court and/or bring documents.

TEMPORARY ORDERS: Written paperwork from the Court to deal with issues, in the short-term, such as spousal maintenance, child support, or financial responsibilities until the final decree of divorce is made.

TEMPORARY SUPPORT: Payments made by one spouse to the other for financial support while the divorce action is pending.

UNBUNDLED LEGAL SERVICES: Hiring a lawyer that can be broken down into different  tasks. You only pay for the services you need, and you do the rest of the work yourself. Examples include hiring a lawyer:

WAGE EXECUTION: The act of taking a person’s wages to satisfy a judgment. Also known as Garnishment.

WRIT OF SUMMONS: A form issued by the court directing a party to respond to a complaint, motion, or petition.

Bev Banfield is a CPA, Certified Divorce Financial Analyst®, and founder of Banfield Divorce Financial Advisors. The Denver-based company was established to help divorcing couples more easily and equitably separate their finances. Banfield has more than 30 years of experience in financial analysis, budgeting, and auditing. Contact us for more information at (303) 482-1726 or bev@bbdfa.com.Connect with her on LinkedIn https://www.linkedin.com/in/bbanfield/

During this COVID-19 outbreak, Banfield Divorce Financial Advisors is fully operational and able to do 100% on-line divorce financial analysis and divorce financial mediation. With video conferencing, we can help you navigate through the divorce process from the comfort of your own home.